Over recent years there have been calls from many family lawyers and in particular pursued by Resolution, which is an an organisation of family lawyers committed to dealing with family breakdown issues in a conciliatory and constructive manner, for a review and change to the divorce laws in England and Wales.

The Matrimonial Causes Act 1973 sets the law which is still in force today, and although there has been some modernisation to include Civil Partnerships and more recently same sex marriages, the law is outdated.

The current requirement for a Divorce is that the marriage has irretrievably broken down, and to prove that one of the five statutory facts must be cited:

The current procedure is outlined below, the Court now also has the online portal system for Divorce. This procedure may change if the Respondent does not co-operate, as additional steps may need to be taken to enable the Divorce to progress. 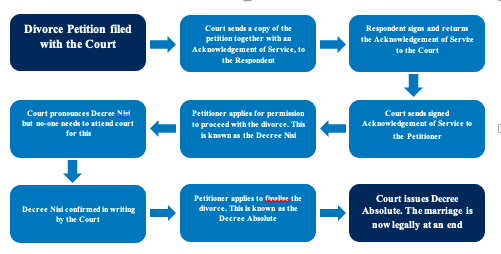 In June 2020 the government’s Divorce, Dissolution and Separation Act 2020 was passed to allow for major overhaul of the divorce process, and to allow no fault divorce.  At present the nearest thing to a no fault divorce is once parties have lived apart for at least 2 years, if the other party consents, or 5 years if there is no consent. This has put many separating couples into the position of having to rely on adultery or behaviour of their spouse to proceed without having to wait.

This can create unnecessary animosity between the couple, where fault has had to be alleged to begin the process.   This can, unfortunately result in hard feelings, and reluctance to negotiate and work together to try and resolve related issues such as finances and arrangements for the children.  This will inevitably also significantly increase legal costs.

The Act will remove the ability to rely on the fault of the other part. Instead, the party issuing the Divorce, or Dissolution  will have to file a statement of irretrievable breakdown. For the first time it will also be possible for the couple to apply together for the divorce.    There will be no opportunity for the other party to defend the divorce, which will remove costly and time consuming cases through the divorce courts when one party does not agree with the divorce  as was seen  in  the well-publicized case of Owens v Owens (2018)

The process is geared to be more straightforward and the terminology will also change to be in plain English - the Decree Nisi will be a Conditional Order, and the Decree Absolute will be a Final Order. The Court online Portal is being improved to be able to cope with the changes, which was said to be a factor why it was put back until April 2022.  This does not mean that Divorces will become “quickie divorces”, there will be a minimum of 20 weeks from when the Divorce application is filed with the Courts before the Conditional Order can be applied for, this is to give parties time for “meaningful reflection”, to proceed after that stage,  this is confirmed when filing the application for Conditional Order – this will then not be made until at least 6 weeks have elapsed.  The whole process is likely to take around 6 months to conclude.

What will remain the same, is that the Divorce proceedings will legally end the marriage, but does not change or deal with related financial matters and ownership and division of matrimonial assets, and legal advice should be sought to resolve these issues and the benefits of having a clean break Consent Order.

As the conflict is lessened by the introduction of the no fault divorce,  it is hoped that parties will be able to focus on dealing with related financial  matters, and arrangements for the children of the family in a more conciliatory manner to enable them to move on with their lives.

Further information is expected regarding the procedure and timing of the implementation of the no fault divorce, before April 2022.

Until the changes come into force the existing procedures remain, however the process does not have to be a battle, and dealing with matters amicably is encouraged.

When relationships break down and you need support and advice, our friendly and experienced family lawyers at Waldrons can guide you through each step of the way, and advise you on the most appropriate way forward based upon your own unique circumstances.

back to all insights

"The service I received from Waldrons Solicitors was first rate.  The Solicitor dealt with my medical negligence claim in a diligent, efficient and prompt manner.  He kept me regularly informed of developments both by telephone and letter.

I found my Solicitor to be courteous, and his guidance and advice was highly valued.

I would have no hesitation in recommending Waldrons Solicitors.

A big thank you to you and your team, for negotiating my medical negligence claim successfully.  Kind regards"